The Revival of Natural Law 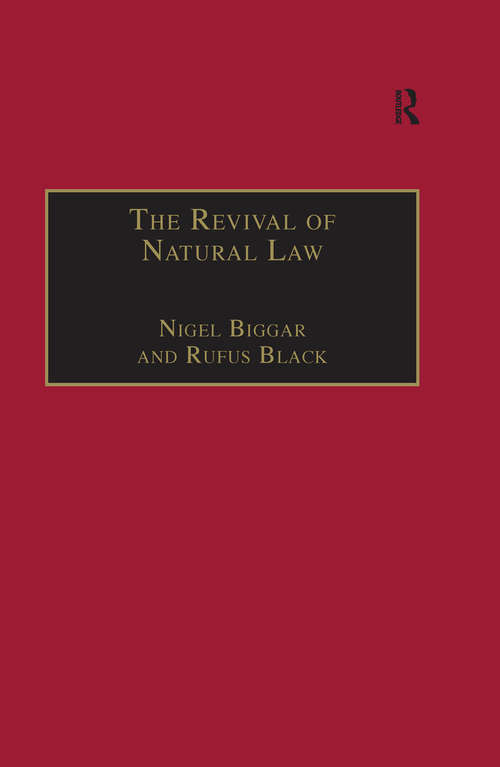 Natural law theory has been enjoying a significant revival in recent times. Led by Germain Grisez in the USA and John Finnis in the UK, one school of thinkers has been articulating a highly developed system of natural law built upon a sophisticated account of practical reasoning and a rich and flexible understanding of the human good. However, long-standing prejudices against old-style natural law among moral philosophers and Protestant ethicists, together with the new theory's appropriation by conservatives in the impassioned debate between the Vatican and dissenting theologians in the United States, have prevented the Finnis-Grisez version from being adequately appreciated. Providing a clear and substantive introduction to the theory for those who are new to it, this book then broadens, assesses, and advances the debate about it, examining crucial philosophical, theological and ethical issues and opening up discussion beyond the confines of the Roman Catholic Church. Part 1, on philosophical issues, starts with two broad chapters that locate the Grisez school in relation to modern moral philosophy and the Roman Catholic philosophical tradition of Thomism, and then follows these with further chapters on two crucial issues: the possibility of consensus on the human good, and the nature of moral absolutes. Part 2, on theological dimensions, begins with a Lutheran critique of Grisez, locates him in relation to the ethics of two very prominent 20th century Protestants, Karl Barth and Stanley Hauerwas, and then explores the major area of theological controversy within the Roman Catholic community - how to conceive of the "Church's" authority with regard to moral matters. Part 3 subjects the school's thought to critical examination in a broad range of ethical fields: bioethics, gender, sex and the environment. A concluding chapter then develops eight topics that recur in the course of the book: the status of ethical realism in the contemporary intellectual climate; whether realism is best conceived in rationalist or naturalist terms; whether marriage should be counted as a basic good; whether physical pleasure should not be counted a basic good; whether it is always wrong to act deliberately against a basic good; the problems of moral certainty and authority; the rapproachement between Protestant and Roman Catholic ethics; and, finally, whether ethical understanding is really independent of one's anthropological point of view. Drawing together North American, European and Australian contributors from across moral philosophy and Protestant ethics as well as from Roman Catholic moral theology, this book opens up the debate about the Finnis-Grisez theory, highlighting its strengths and weaknesses in order to advance current discussion about natural law in moral theology and in moral and legal philosophy.