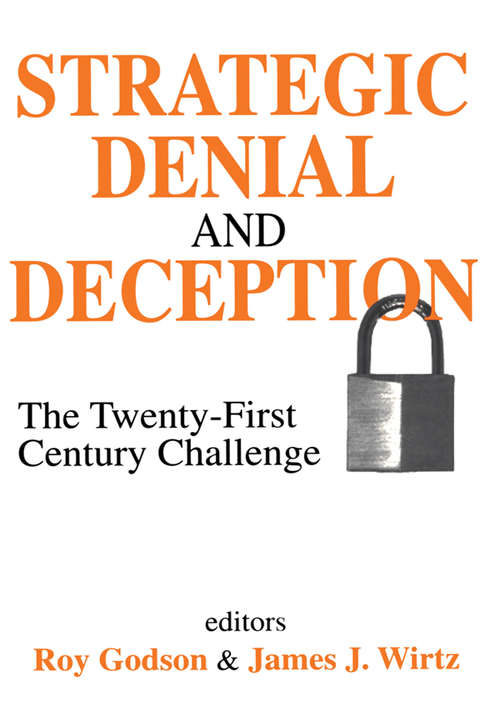 Does foreign denial and deception threaten the interests of contemporary democracies? Strategic denial and deception (D&D) has emerged as a little understood challenge to security in general, and the intelligence community in particular. To gain advantages, adversaries seek to deny critical information about their own activities and capabilities, and to decieve foreign governments. In recent years, Iraq, India, Somalia, Colombian criminal groups, and terrorists, for example, have all used D&D successfully against the United States. Denial and deception is a low cost, potentially high impact to level political, military, and economic playing fields, particularly against strong opponents.Concerns about the threat of denial and deception have waxed and waned since the end of World War II. Sometimes it shaped assessments about the former Soviet Union, for example. At other times, such as the end of the Cold War, such threats appear to fade into insignificance. This volume considers whether globalization, proliferating communication technologies, and the dissemination of vast amounts of information make effective foreign denial and deception more or less likely. Contributors also examine whether more information and data sources make policymakers better informed or simply create confusion.Drawing on lessons learned from historical experiences, the authors propose ways to minimize future challenges. Chapters include ""Elements of Strategic Denial and Deception,"" by Abram Shulsky; ""Conditions Making for Success and Failure of D&D,"" by Barton Whaley; ""Conditions Making for Success and Failure of D&D,"" by M.R.D. Foot; ""Conditions Making for Success and Failure of D&D,"" by J. Bowyer Bell; ""Arms Control,"" by Lynn M. Hansen; and ""Prescription: Detecting Deception-Practice, Practitioners, and Theory,"" by Barton Whaley and Jeffrey Busby.While there are previous books about celebrated D&D cases, from Troy to Pearl Harbor and D-Day, no work attempts to assess how these instruments o