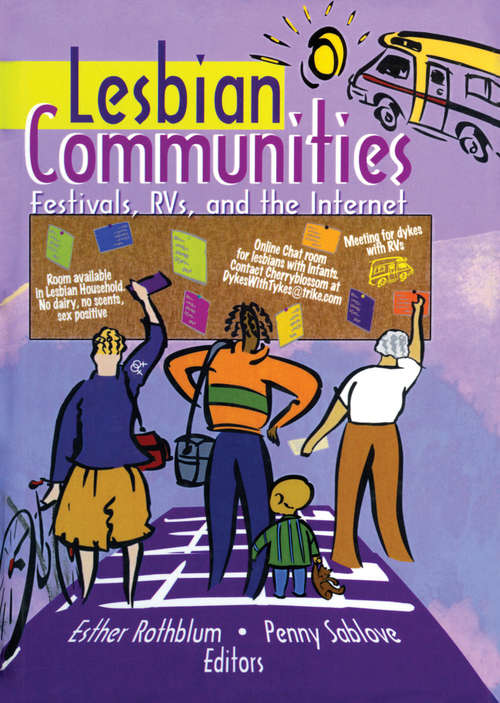 I had just witnessed women who shingled their own roofs, drove eighteen-wheeler trucks, and built their own housesas well as kept them clean and cooked a damn good meal. On women&’s land I am a first-class citizen, I&’m treated as an equal. I now see the world with righteous anger and hope. Living in womyn&’s community has provided that lens for me.Elizabeth Sturrus, third wave feministOne of the driving forces in the lives of many lesbians is the search for community in a society that favors heterosexuality and often turns a cold shoulder toward women who love women. Lesbian Communities: Festivals, RVs, and the Internet takes you inside flourishing lesbian communitiesphysical, spiritual, and virtual (online)that provide practical help, emotional support, and much-needed outlets for creative expression. Exploring communities functioning in harmony with general American society as well as separatist groups, festival communities which form for short times annually, and informal online groups offering meaningful communication to physically isolated lesbians, this book offers a ray of light to those whose search is still ongoing. It also provides much-needed analysis of the current state of lesbian communitiessome decades old nowfor educators, researchers, and social scientists. In Lesbian Communities: Festivals, RVs, and the Internet, Susan Krieger revisits the vibrant community she first explored in The Mirror Dance. An African American member of Old Lesbians Organizing for Change shares the details of her search for a cooperative, caring space for aging lesbiansand what led to her eventual decision to create this space herself. And one of the founders of Hallomas, a back-to-the-land community that has survived in northern California since the late 1970s, reflects on that unique community&’s birth and lifewith 13 photographs and illustrations. The book also bears witness to a life-changing encounter and dialogue between second-wave feminists from the woman's land collective of Arcadia and third wave feminists. You&’ll also learn about: the birth, joys, and tribulations of an online community that becomes physical each year at the Michigan Womyn&’s Music Festival the accidental birth of a lesbian community in isolated and fundamentalist-dominated West Texas the international online lesbian parenting community called MOMS (affectionately known as Dykes and Tykes)how it began, what belonging to this community provides for its members, and a look toward the future the debate on inclusiveness versus exclusiveness (of bisexual women, transgender people, and the male children of lesbians) in lesbian communities the current decline of availability and dilution of the purity of lesbian-only spaceand the rise of segregation (by social class and financial status) and oppression within the lesbian community the current plight of lesbian bookstores, which since the 1970s have served not only as gateways to a multitude of lesbian communities, but as the centers of lesbian communities themselves the online experience of lesbians searching for community in Japan the issues facing Jewish lesbians and the formation of Nice Jewish Girls, a Montreal group for anyone who identifies as a lesbian, bisexual, or queer woman and their non-Jewish partners and friends the power of myth and mythmaking to help women regain lost strength and reclaim lost history From the efforts of back-to-the-land groups creating wimmin&’s space to life in modern residential/retirement settings, this book explores the places created by and for lesbians. Photos and illustrations bring these women and their communities to life. Lesbian Communities: Festivals, RVs, and the Internet w