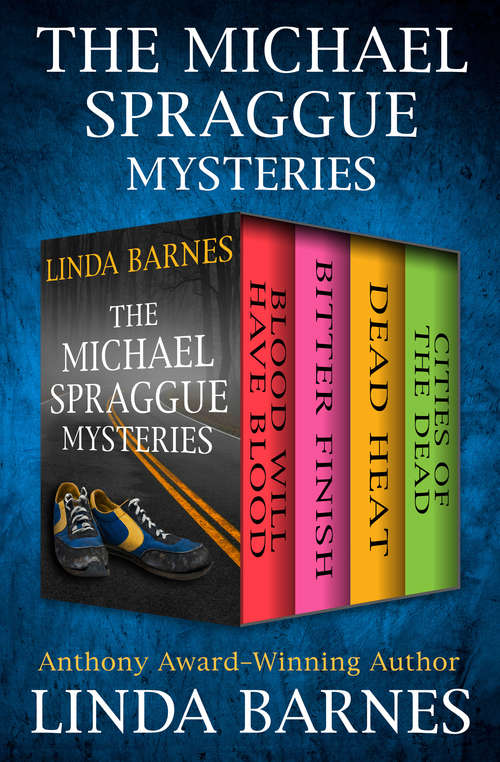 From the author of the Carlotta Carlyle Mysteries: The complete set of the popular series starring an ex-PI turned actor, “a hero with panache” (Kirkus Reviews). Anthony Award–winning author Linda Barnes is perhaps best known for her six-foot-tall, redheaded ex-cop and Boston-based private eye Carlotta Carlyle. But fellow Bostonian Michael Spraggue, a former private investigator who caught the acting bug, just can’t seem to leave his past career as a sleuth behind him. Blood Will Have Blood: When Michael lands a part in a new production of Dracula, it’s not just because of his acting talent. With his private-eye background, Spraggue is perfectly cast to investigate some strange goings-on in the reputedly haunted old Fens Theater, including a pitcher of Bloody Marys holding real blood. When the pranks turn lethal, Michael needs to find the killer before it is curtains for all. “Ms. Barnes and Mr. Spraggue should be around for a while.” —The New York Times Book Review Bitter Finish: Shooting on location in Boston, Michael gets an urgent call from Kate Holloway, his on-again-off-again lover and partner in a fledgling Napa Valley winery. Their winemaker has disappeared. When the police find a corpse on their property, Kate is arrested. To free his girl and save his winery, Michael will have to find a killer with a lethal case of sour grapes. “A fine job—expertly written, with an ingenious wine caper set in the Napa Valley.” —The New York Times Book Review Dead Heat: Brian Donagher, a junior senator from Massachusetts who took Washington by storm, is running for re-election—but he may soon be running for his life. He’s getting death threats, and his bodyguard asks his old pal Michael Spraggue for help in tracking down whoever is targeting the politician. The senator plans to run the Boston Marathon, so Michael will have to race to blow the whistle on a killer if Donagher wants to cross the finish line. “Like its predecessors, Dead Heat is worth reading. . . . Characterizations are well worked out, and when evil gets its comeuppance, the reader may start cheering.” —The Washington Post Cities of the Dead: Dora Levoyer, who has cooked for Michael’s aunt Mary since he was a boy, will always be family. While on vacation in New Orleans, she attends a banquet held by the finest chefs and sees a man who looks just like the husband who abandoned her years ago. Before she can confront him, he is found with a chef’s knife embedded in his heart—and Dora is suspected. Michael catches the next plane to the Big Easy—a place where the dead, like the living, have dangerous secrets. “Well written, sharply observed, logically plotted.” —The New York Times Book Review