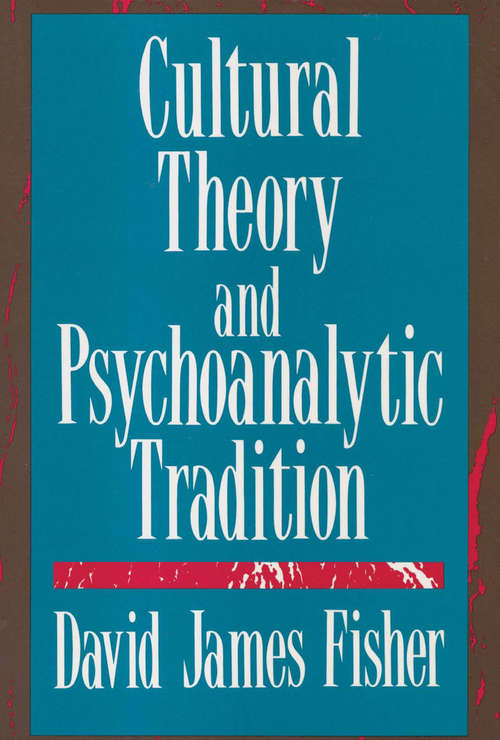 The culture of psychoanalysis has many traditions and multiple schools of theory and thought. This work presents informative and original investigations into three overlapping areas of psychoanalytic tradition: the history of psychoanalysis; psychoanalytic culture criticism; and the application of psychoanalytic methods to the study of history. In this carefully crafted evaluation of various authors and subjects, Fisher's perceptions are informed by a deep and comprehensive knowledge of the psychoanalytic movement, its interaction with the wider context of European cultural and political history, and its philosophical and clinical origins.

In examining the history of the movement, Fisher attempts to discover the fundamental inspiration of psychoanalysis by returning to the origins of the discipline. Freud is the central figure here, but Fisher also looks to the second generation of European analysts, including such maverick figures as Lacan and Spielrein, and mainstream figures as Fenichel to gain insight into the multidimensional and creative personalities who were drawn to Freud and his ideas. In his discussion of psychoanalytic culture criticism, Fisher analyzes symbolic meanings and psychological themes from a variety of written works. In an analysis of Freud's Civilization audits Discontents, the author argues that the figure of Romain Rolland is pervasive throughout the text as symbol, muse, stimulus, and adversary.

Reading analytic theory and applying it to personalities and situations from the past allowed historians to address issues of their own inner world and to develop breathtaking possibilities for understanding the past. Brilliantly written and historical and critical in method, Cultural Theory and Psychoanalytic Tradition offers valuable insights into significant themes and ambiguities in the diverse areas of psychoanalysis. Intellectual historians and psychoanalysts will find reliable introductions and springboards f