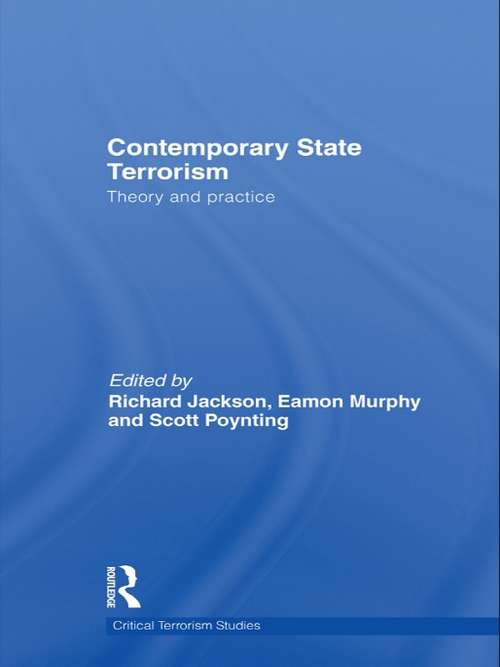 This volume aims to ‘bring the state back into terrorism studies’ and fill the notable gap that currently exists in our understanding of the ways in which states employ terrorism as a political strategy of internal governance or foreign policy.

Within this broader context, the volume has a number of specific aims. First, it aims to make the argument that state terrorism is a valid and analytically useful concept which can do much to illuminate our understanding of state repression and governance, and illustrate the varieties of actors, modalities, aims, forms, and outcomes of this form of contemporary political violence. Secondly, by discussing a rich and diverse set of empirical case studies of contemporary state terrorism this volume explores and tests theoretical notions, generates new questions and provides a resource for further research. Thirdly, it contributes to a critical-normative approach to the study of terrorism more broadly and challenges dominant approaches and perspectives which assume that states, particularly Western states, are primarily victims and not perpetrators of terrorism. Given the scarceness of current and past research on state terrorism, this volume will make a genuine contribution to the wider field, particularly in terms of ongoing efforts to generate more critical approaches to the study of political terrorism.

Richard Jackson is Reader in International Politics at the University of Wales, Aberystwyth. He is the founding editor of the Routledge journal, Critical Studies on Terrorism and the convenor of the BISA Critical Studies on Terrorism Working Group (CSTWG). Eamon Murphy is Professor of History and International Relations at Curtin University of Technology in Western Australia. Scott Poynting is Professor in Sociology at Manchester Metropolitan University.