Healing, Performance and Ceremony in the Writings of Three Early Modern Physicians 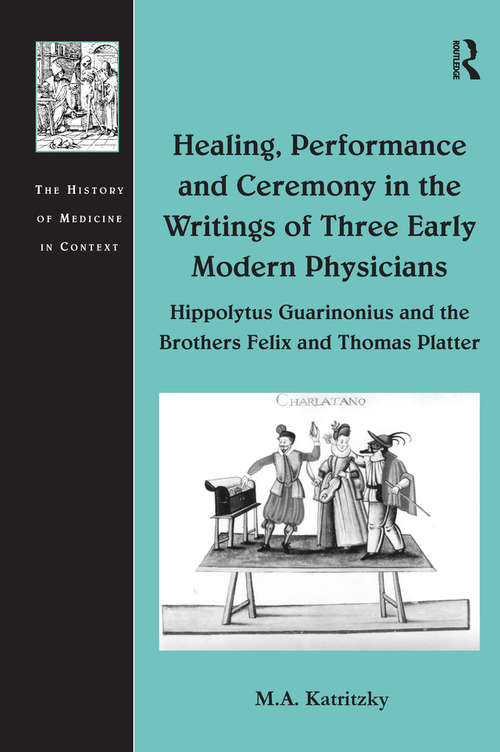 While the writings of early modern medical practitioners habitually touch on performance and ceremony, few illuminate them as clearly as the Protestant physicians Felix Platter and Thomas Platter the Younger, who studied in Montpellier and practiced in their birth town of Basle, or the Catholic physician Hippolytus Guarinonius, who was born in Trent, trained in Padua and practiced in Hall near Innsbruck. During his student years and brilliant career as early modern Basle's most distinguished municipal, court and academic physician, Felix Platter built up a wide network of private, religious and aristocratic patients. His published medical treatises and private journal record his professional encounters with them as a healer. They also offer numerous vivid accounts of theatrical events experienced by Platter as a scholar, student and gifted semi-professional musician, and during his Grand Tour and long medical career. Here Felix Platter's accounts, many unavailable in translation, are examined together with relevant extracts from the journals of his younger brother Thomas Platter, and Guarinonius's medical and religious treatises. Thomas Platter is known to Shakespeare scholars as the Swiss Grand Tourist who recorded a 1599 London performance of Julius Caesar, and Guarinonius's descriptions of quack performances represent the earliest substantial written record of commedia dell'arte lazzi, or comic stage business. These three physicians' records of ceremony, festival, theatre, and marketplace diversions are examined in detail, with particular emphasis on the reactions of 'respectable' medical practitioners to healing performers and the performance of healing. Taken as a whole, their writings contribute to our understanding of many aspects of European theatrical culture and its complex interfaces with early modern healthcare: in carnival and other routine manifestations of the Christian festive year, in the extraordinary performance and ceremony of court festivals, and above all in the rarely welcomed intrusions of quacks and other itinerant performers.