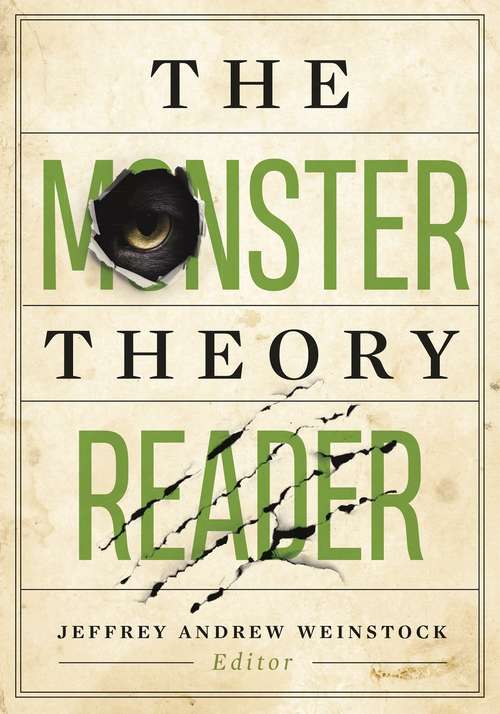 A collection of scholarship on monsters and their meaning—across genres, disciplines, methodologies, and time—from foundational texts to the most recent contributions Zombies and vampires, banshees and basilisks, demons and wendigos, goblins, gorgons, golems, and ghosts. From the mythical monstrous races of the ancient world to the murderous cyborgs of our day, monsters have haunted the human imagination, giving shape to the fears and desires of their time. And as long as there have been monsters, there have been attempts to make sense of them, to explain where they come from and what they mean. This book collects the best of what contemporary scholars have to say on the subject, in the process creating a map of the monstrous across the vast and complex terrain of the human psyche.Editor Jeffrey Andrew Weinstock prepares the way with a genealogy of monster theory, traveling from the earliest explanations of monsters through psychoanalysis, poststructuralism, and cultural studies, to the development of monster theory per se—and including Jeffrey Jerome Cohen&’s foundational essay &“Monster Theory (Seven Theses),&” reproduced here in its entirety. There follow sections devoted to the terminology and concepts used in talking about monstrosity; the relevance of race, religion, gender, class, sexuality, and physical appearance; the application of monster theory to contemporary cultural concerns such as ecology, religion, and terrorism; and finally the possibilities monsters present for envisioning a different future. Including the most interesting and important proponents of monster theory and its progenitors, from Sigmund Freud to Julia Kristeva to J. Halberstam, Donna Haraway, Barbara Creed, and Stephen T. Asma—as well as harder-to-find contributions such as Robin Wood&’s and Masahiro Mori&’s—this is the most extensive and comprehensive collection of scholarship on monsters and monstrosity across disciplines and methods ever to be assembled and will serve as an invaluable resource for students of the uncanny in all its guises.Contributors: Stephen T. Asma, Columbia College Chicago; Timothy K. Beal, Case Western Reserve U; Harry Benshoff, U of North Texas; Bettina Bildhauer, U of St. Andrews; Noel Carroll, The Graduate Center, CUNY; Jeffrey Jerome Cohen, Arizona State U; Barbara Creed, U of Melbourne; Michael Dylan Foster, UC Davis; Sigmund Freud; Elizabeth Grosz, Duke U; J. Halberstam, Columbia U; Donna Haraway, UC Santa Cruz; Julia Kristeva, Paris Diderot U; Anthony Lioi, The Julliard School; Patricia MacCormack, Anglia Ruskin U; Masahiro Mori; Annalee Newitz; Jasbir K. Puar, Rutgers U; Amit A. Rai, Queen Mary U of London; Margrit Shildrick, Stockholm U; Jon Stratton, U of South Australia; Erin Suzuki, UC San Diego; Robin Wood, York U; Alexa Wright, U of Westminster.