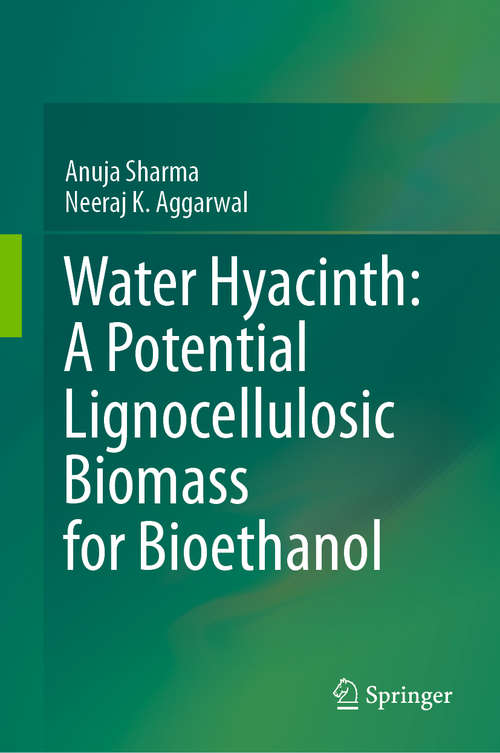 This book discusses the production of bioethanol from water hyacinth, a potential source of lignocellulosic biomass. Biofuels, as an alternative to fossil fuels, not only ensure energy security but also mitigate air pollution and reduce greenhouse emissions. Biofuels can be produced from sugar- and starch-rich food crops (first-generation biofuel) or lignocellulosic biomass (second-generation biofuel). However, the overexploitation of conventional lignocellulosic sources such as agro-industrial residues, dedicated herbaceous, hardwoods and softwoods and forest residues may lead to problems in terms of land management and biodiversity conservation. Non-conventional sources include industrial cellulosic waste, municipal solid waste and weeds. Of these, weeds are an attractive lignocellulosic source due to their prevalence and easy availability. Eichhornia crassipes, commonly known as water hyacinth, is one of the world’s most invasive weeds due to its rapid proliferation rate, efficient survival strategies in extreme conditions, and it has a significant impact on the environment, ecological communities, human health and socioeconomic development. Strategies including physical removal, chemical methods and biological control agents have proven inefficient in completely eradicating Eichhornia crassipes. On the other hand, water hyacinth has a low lignin and high holocellulose content and is a rich source of lignocellulosic biomass, and has therefore been exploited as a raw material for the production of biofuel, biogas, animal and fish feed, compost and other valuable products. Further, being an aquatic plant, it does not compete with food crops for land resources. The bioethanol-generating capacity of water hyacinth is comparable to that of agricultural waste, making it a potential raw material for biofuel production.