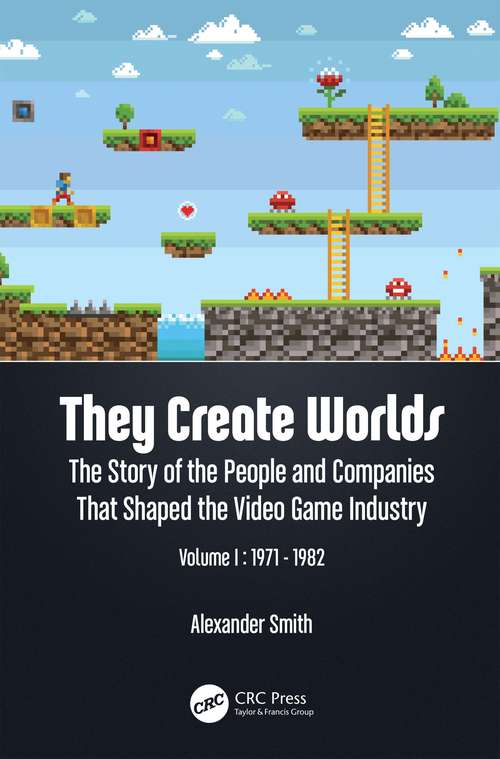 They Create Worlds: The Story of the People and Companies That Shaped the Video Game Industry, Vol. 1 is the first in a three-volume set that provides an in-depth analysis of the creation and evolution of the video game industry. Beginning with the advent of computers in the mid-20th century, Alexander Smith’s text comprehensively highlights and examines individuals, companies, and market forces that have shaped the development of the video game industry around the world. Volume one, places an emphasis on the emerging ideas, concepts, and games developed from the commencement of the budding video game art form in the 1950s and 1960s through the first commercial activity in the 1970s and early 1980s. They Create Worlds aims to build a new foundation upon which future scholars and the video game industry itself can chart new paths.

The most in-depth examination of the video game industry ever written, They Create Worlds charts the technological breakthroughs, design decisions, and market forces in the United States, Europe, and East Asia that birthed a $100 billion industry.

The books derive their information from rare primary sources such as little-studied trade publications, personal papers collections, and oral history interviews with designers and executives, many of whom have never told their stories before.

Spread over three volumes, They Create Worlds focuses on the creative designers, shrewd marketers, and innovative companies that have shaped video games from their earliest days as a novelty attraction to their current status as the most important entertainment medium of the 21st Century.

The books examine the formation of the video game industry in a clear narrative style that will make them useful as teaching aids in classes on the history of game design and economics, but they are not being written specifically as instructional books and can be enjoyed by anyone with a passion for video game history.