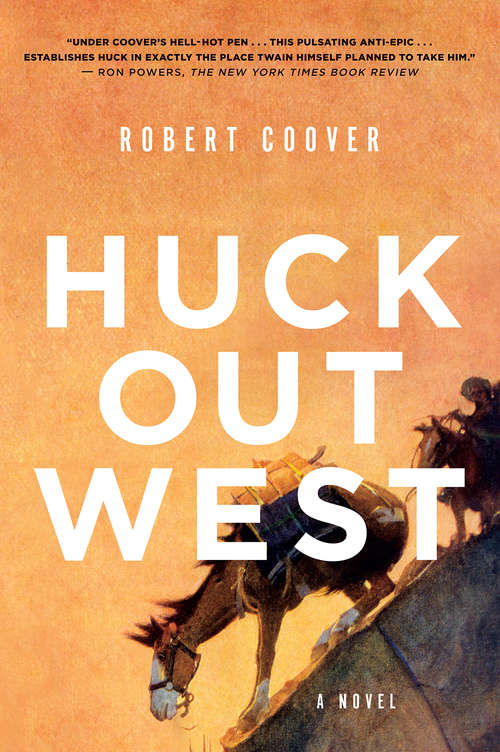 Our leading postmodernist novelist turns his iconoclastic eye to a great American classic in this sequel to The Adventures of Huckleberry Finn.

At the end of Mark Twain’s Huckleberry Finn, on the eve of the Civil War, Huck and Tom Sawyer decide to escape “sivilization” and “light out for the Territory.” In Robert Coover’s Huck Out West, also “wrote by Huck,” the boys do just that, riding for the famous but short-lived Pony Express, then working as scouts for both sides in the war.

They are suddenly separated when Tom decides he’d rather own civilization than leave it, returning east with his new wife, Becky Thatcher, to learn the law from her father. Huck, abandoned and “dreadful lonely,” hires himself out to “whosoever.” He rides shotgun on coaches, wrangles horses on a Chisholm Trail cattle drive, joins a gang of bandits, guides wagon trains, gets dragged into U.S. Army massacres, suffers a series of romantic and barroom misadventures.

He is eventually drawn into a Lakota tribe by a young brave, Eeteh, an inventive teller of Coyote tales who “was having about the same kind of trouble with his tribe as I was having with mine.” There is an army colonel who wants to hang Huck and destroy Eeteh’s tribe, so they’re both on the run, finding themselves ultimately in the Black Hills just ahead of the 1876 Gold Rush.

This period, from the middle of the Civil War to the centennial year of 1876, is probably the most formative era of the nation’s history. In the West, it is a time of grand adventure, but also one of greed, religious insanity, mass slaughter, virulent hatreds, widespread poverty and ignorance, ruthless military and civilian leadership, huge disparities of wealth. Only Huck’s sympathetic and gently comical voice can make it somehow bearable.