My Turn At Bat 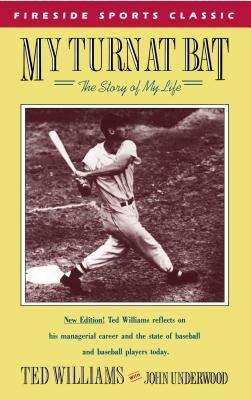 Now available for the first time in years, My Turn at Bat is Ted Williams' own story of his spectacular life and baseball career.

An acclaimed best-seller, My Turn at Bat now features new photographs and, for the first time, Ted's reflections on his managing career and the state of baseball as it is played in the 1980s. It's all here in this brilliant, honest and sometimes angry autobiography -- Williams' childhood days in San Diego, his military service, his unforgettable major league baseball debut and ensuing Hall of Fame career that included two Triple Crowns, two Most Valuable Player awards, six batting championships, five Sporting News awards as Major League Player of the Year, 521 lifetime homeruns and a .344 career batting average. And Williams tells his side of the controversies, from his battles with sportswriters and Boston fans to his single World Series performance and his career with the declining Red Sox of the 1950s.

My Turn at Bat belongs in the library of everyone who loves Ted Williams, baseball, or great life stories well-told.

Red Barber proclaimed My Turn at Bat to be: "One of the best baseball books I've ever read." John Leonard of The New York Times said My Turn at Bat was "unbuttoned and wholly engaging...the portrait of an original who is unrepentant about being better than anyone else."