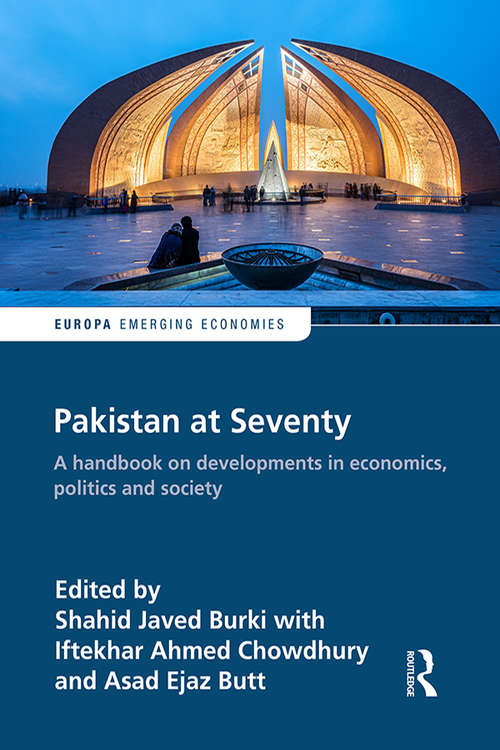 This handbook examines Pakistan’s 70-year history from a number of different perspectives.When Pakistan was born, it did not have a capital, a functioning government or a centralbank. The country lacked a skilled workforce. While the state was in the process of beingestablished, eight million Muslim refugees arrived from India, who had to be absorbed into apopulation of 24 million people. However, within 15 years, Pakistan was the fastest growingand transforming economy in the developing world, although the political evolution of thecountry during this period was not equally successful. Pakistan has vast agricultural andhuman resources, and its location promises trade, investment and other opportunities. Chapters in the volume, written by experts in the field, examine government and politics, economics,foreign policy and environmental issues, as well as social aspects of Pakistan’s development,including the media, technology, gender and education.

Shahid Javed Burki is an economist who has been a member of the faculty at Harvard University, USA, and Chief Economist, Planning and Development Department, Government ofthe Punjab. He has also served as Minister of Finance in the Government of Pakistan, and haswritten a number of books, and journal and newspaper articles. He joined the World Bank in1974 as a senior economist and went on to serve in several senior positions. He was the (first)Director of the China Department (1987–94) and served as the Regional Vice-President forLatin America and the Caribbean during 1994–99. He is currently the Chair of the Board ofDirectors of the Shahid Javed Burki Institute of Public Policy at NetSol (BIPP) in Lahore.

Iftekhar Ahmed Chowdhury is a career Bangladeshi diplomat and former Minister of ForeignAffairs in the Government of Bangladesh (2007–08). He has a PhD in international relationsfrom the Australian National University, Canberra. He began his career as a member of thecivil service of Pakistan in 1969. Dr Chowdhury has held senior diplomatic positions in thecourse of his career, including as Permanent Representative of Bangladesh to the UnitedNations in New York (2001–07) and in Geneva (1996–2001), and was ambassador to Qatar,Chile, Peru and the Vatican. He is currently a visiting senior research fellow at the Institute ofSouth Asian Studies, National University of Singapore.

Asad Ejaz Butt is the Director of the Burki Institute of Public Policy, Lahore, Pakistan.