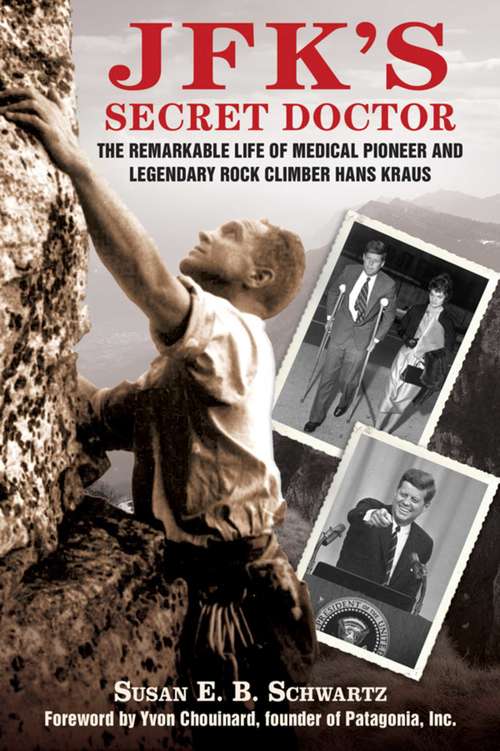 Set against the grand panorama of twentieth-century world events, it captures the remarkable life and spirit of climbing and medical visionary Hans Kraus (1905-1966). Kraus was taught English by James Joyce, escaped Nazi dominated Europe, and was JFK’s secret back specialist. A legendary rock climber known for hair-raising ascents on two continents, Kraus lived a life filled with tragedy and triumph, intense passion, verve, and a whole lot of guts, glory, and wit. One of the great unsung medical pioneers of the twentieth century, Kraus made headline news throughout the second half of the 1950s, was a guest of honor at Eisenhower’s White House, and was the subject of cover stories in major magazines throughout America, including Sports Illustrated. His pioneering work in muscles and fitness uncovered a shocking truth about a lack of fitness in American children, and his work curing back pain brought him into the Kennedy White House and inner circle of Camelot. Here now is the life of Hans Kraus, including the behind-the-scenes story of Kennedy’s crippling back problems, based on new documentation, including White House medical records and interviews with two Kennedy White House doctors. Skyhorse Publishing, as well as our Arcade imprint, are proud to publish a broad range of books for readers interested in history--books about World War II, the Third Reich, Hitler and his henchmen, the JFK assassination, conspiracies, the American Civil War, the American Revolution, gladiators, Vikings, ancient Rome, medieval times, the old West, and much more. While not every title we publish becomes a New York Times bestseller or a national bestseller, we are committed to books on subjects that are sometimes overlooked and to authors whose work might not otherwise find a home.