The Life and Times of Abu Tammam 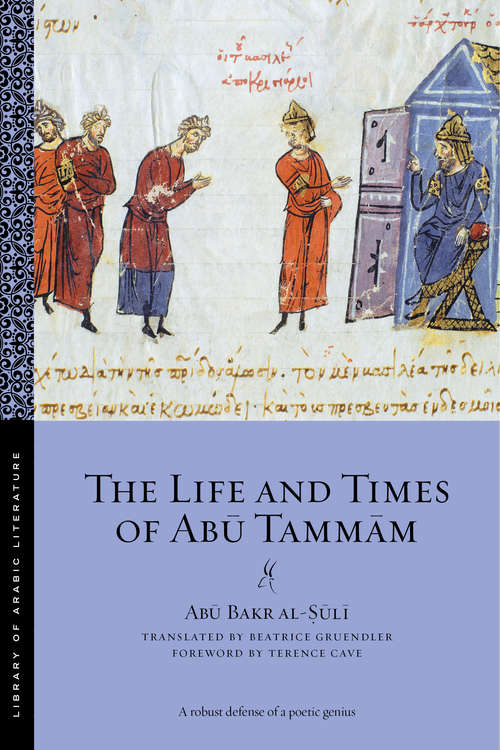 Abu Tammam (d. 231 or 232 H/845 or 846 AD) is one of the most celebrated poets in the Arabic language. Born in Syria of Greek Christian background, he soon made his name as one of the premier Arabic poets in the caliphal court of Baghdad. Abu Tammam vigorously promoted a new style of poetry that merged abstract and complex imagery with archaic Bedouin language. Both highly controversial and extremely popular, Abu Tammam’s sophisticated verse epitomized the “modern style” (badi') that influenced all subsequent Arabic and Arabic-inspired poetry—an avant-garde aesthetic that was very much in step with the intellectual, artistic and cultural vibrancy of the Abbasid dynasty.

In The Life and Times of Abu Tammam, translated into English for the first time, the courtier and scholar Abu Bakr Muhammad ibn Yahya al-Suli (d. 335 or 336 H/946 or 947 AD) mounts a robust defense of “modern” poetry and of Abu Tammam’s significance as a poet against his detractors, while painting a lively picture of literary life in Baghdad and Samarra. Born into an illustrious family of Turkish origin, al-Suli was a courtier, companion, and tutor of the Abbasid caliphs who wrote extensively on caliphal history and poetry and, as a scholar of “modern” poets, made indelible contributions to the field of Arabic literature. Like the poet it promotes, al-Suli’s text is groundbreaking; it represents a major step in the development of Arabic poetics, and inaugurates a long line of treatises on innovation in poetry.