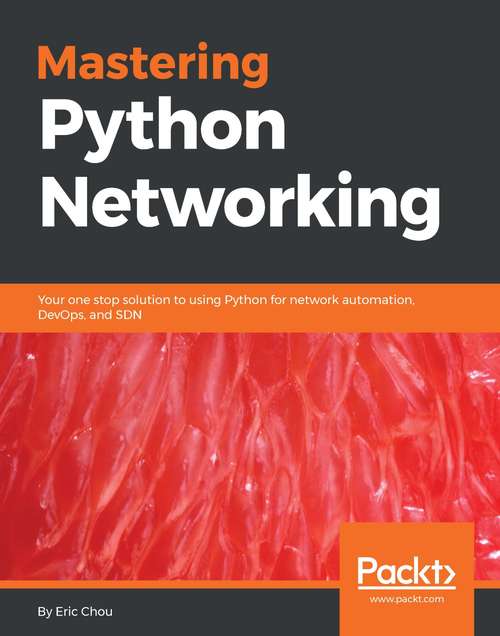 Become an expert in implementing advanced, network-related tasks with Python.

• Use Python for network device automation, DevOps, and software-defined networking

• Get practical guidance to networking with Python

If you are a network engineer or a programmer who wants to use Python for networking, then this book is for you. A basic familiarity with networking-related concepts such as TCP/IP and a familiarity with Python programming will be useful.

• Review all the fundamentals of Python and the TCP/IP suite

• Construct a Python-based migration plan from a legacy to scalable SDN-based network.

This book begins with a review of the TCP/ IP protocol suite and a refresher of the core elements of the Python language. Next, you will start using Python and supported libraries to automate network tasks from the current major network vendors. We will look at automating traditional network devices based on the command-line interface, as well as newer devices with API support, with hands-on labs. We will then learn the concepts and practical use cases of the Ansible framework in order to achieve your network goals.

We will then move on to using Python for DevOps, starting with using open source tools to test, secure, and analyze your network. Then, we will focus on network monitoring and visualization. We will learn how to retrieve network information using a polling mechanism, ?ow-based monitoring, and visualizing the data programmatically. Next, we will learn how to use the Python framework to build your own customized network web services.

In the last module, you will use Python for SDN, where you will use a Python-based controller with OpenFlow in a hands-on lab to learn its concepts and applications. We will compare and contrast OpenFlow, OpenStack, OpenDaylight, and NFV. Finally, you will use everything you've learned in the book to construct a migration plan to go from a legacy to a scalable SDN-based network.