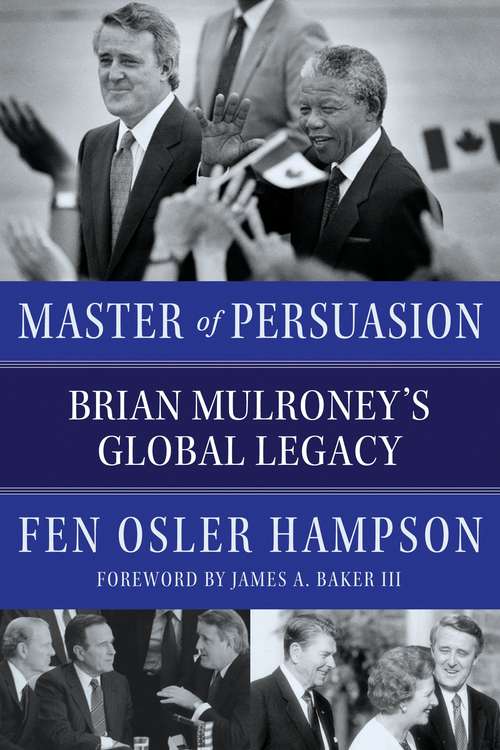 By: James A. Baker • Fen Osler Hampson
Login
Sign Up

Based on unprecedented access--interviews with key players, diaries, memos, etc.--the first book to document Brian Mulroney's impressive foreign policy record, from NAFTA to the collapse of the Soviet Union, climate change to the release of Nelson Mandela.Brian Mulroney led and lifted Canada's voice and influence in world affairs to unprecedented heights. Through negotiation and the deliberate cultivation of close personal links with other world leaders, there were significant achievements that serve Canadian interests to this day. Mulroney's bold initiatives on trade, the environment, and human rights turned the tradition and history of his party on its head and gave distinct emphasis to the "progressive" adjective in the party name. The pursuit of Free Trade ran completely counter to his party's history. Efforts to combat acid rain, repair the ozone layer, and to champion climate change long before it became fashionable, surprised and satisfied many of the most ardent advocates on the environment. In an even more turbulent world, Mulroney's determination to act for Canada and his strong record of achievement offer compelling lessons for the Canadian public and, especially, for Canadian leaders as they struggle to punch above their weight and make their voices heard in a world which is not necessarily waiting for "more Canada." Prime Minister Brian Mulroney understood better than many of his predecessors that Canada's power and influence derive from a solid grasp of Canada's vital national interests and a purposeful commitment to pursuing those interests and values on the world stage. This book will tell valuable stories about how Canada succeeded in advancing its national interests on trade, the environment, national security, and the advancement of democracy and human rights under Brian Mulroney's leadership. It will explore how he built "teams of rivals" both at home and abroad in pursuit of those interests, and a more prosperous, stable, and just international order, while underscoring the importance of his personal interventions and the trust and respect these reflected. Perhaps, most important of all, Brian Mulroney put to bed that long standing myth that Canada could not be a respected international player if it was seen as being too close to the United States. He showed that a "special relationship" with Washington was in fact the sine qua non to project Canada's interests and global influence. In sharp contrast to his predecessor, the path for global influence for Canada began with a principled and trusted dialogue with Washington, one that other world leaders noticed. As Canada's new Liberal government navigates its own course in choppy international waters, there is much to be learned from Canada's finest hour on the international stage some three decades ago under Prime Minister Brian Mulroney.