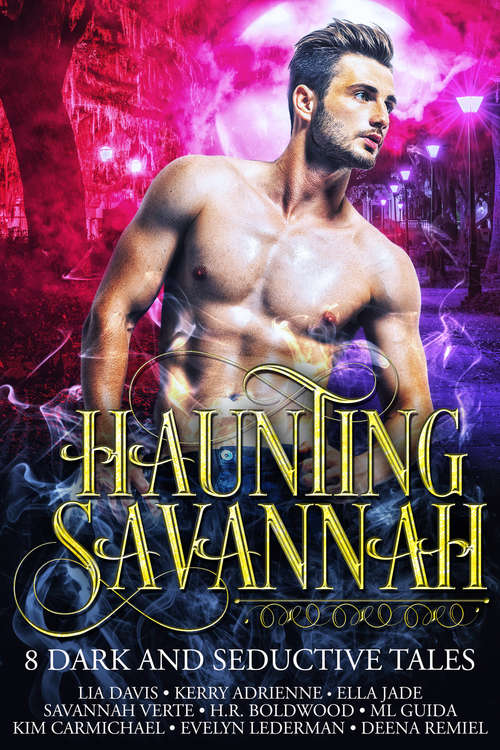 Spend Halloween in Savannah with eight dark, seductive tales of ghosts, vampires, demons, witches, and warlocks.Nine bestselling authors come together in this collection of eight BRAND NEW, Halloween themed novellas.A look inside…Ghost in a Bottle by Lia Davis & Kerry AdrienneAnatoli La Croix has spent the last century cursed to exist in spirit form, locked inside a glass jar. When the beautiful and magickal Ophelia purchases the jar, he discovers he’s able to escape his confinement for short periods. For the first time in a century, he has hope. Could the beautiful witch be the one to break his curse? Or will she provoke the evil spirit that imprisoned him and bring dark magick’s wrath down on them both? Forbidden Union by Deena RemielIt’s Halloween in Savannah. Noah Blackman has come to Savannah, Georgia and Violet Adams’ home seeking to verify the origins of his family. Could his roots begin with a runaway slave? This trip holds many surprises for the two as their family’s pasts collide and their present charts a course for romance and lasting love. True Companions by Ella JadeMaxim and Grant have been lovers for a century. Companions in the truest sense. What happens when a human woman shares their home and their bed? Can two destined souls open their hearts to a third? The Ultimate Act of Love by Evelyn LedermanThe last thing Kori Daniels expected to see on a ghost tour is an actual apparition. Although she can feel earth-bound spirits, she has never seen one. Already impacted by nightly amorous dreams since arriving in Savannah, her dream lover now has a face. The Haunting of Bellehaven by H.R. BoldwoodSelf-reliant Harper McKinnon arrives in Savannah to claim her inheritance, Bellehaven Plantation—a proud antebellum estate. But the estate’s handsome caretaker, Clay Montgomery, is used to doing things his way. Fireworks fly as they are drawn ever closer, but the plantation’s ghostly secrets threaten both their love and their lives. The Promise by Kim CarmichaelA mistake brought a demon to her, a promise kept them bound together. It is a thin line between desire and love and good and evil when an incubus enters Leora Desmond’s life. Veil Break by Savannah VerteTaken from the world he knows, to a place out of time, Holden Henry has a lot of questions when he is redeposited into his world, 150 years in the future. His Savannah isn’t the same anymore. A Pirate’s Mask by ML GuidaDark secrets haunt the Pirate’s House Inn in Savannah, Georgia. Rosalind Gill’s stepfather is the culprit. He’s forcing her to remain silent and marry his evil partner or die. Her only hope is Phearson MacFie-a vampire pirate from another time. They must work together to not only save the innocent, but save themselves and discover true love.