The Development of Mathematics 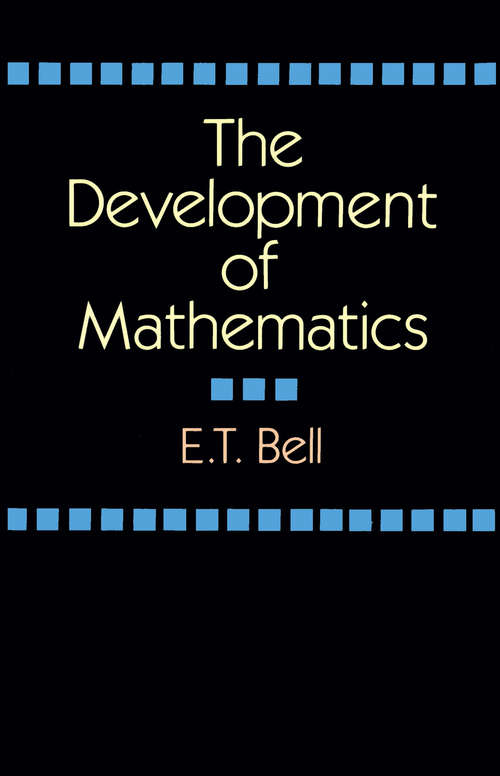 "This important book . . . presents a broad account of the part played by mathematics in the evolution of civilization, describing clearly the main principles, methods, and theories of mathematics that have survived from about 4000 BC to 1940."- BooklistIn this time-honored study, one of the 20th century's foremost scholars and interpreters of the history and meaning of mathematics masterfully outlines the development of its leading ideas, and clearly explains the mathematics involved in each. According to the author, a professor of mathematics at the California Institute of Technology from 1926 until his death in 1960, it is "not a history of the traditional kind, but a narrative of the decisive epochs in the development of mathematics." It is a narrative filled with compelling insights of special interest to every mathematician, engineer, and scientist.Main trends in mathematics from approximately 4000 BC to the 20th century are presented through analyses of typical major episodes in each. The author first examines the evolution of mathematical ideas in the ancient civilizations of Egypt and Babylonia; later developments in India, Arabia, and Spain; and other achievements worldwide through the 16th century. Professor Bell then traces the beginnings of modern mathematics in the 17th century, and the emergence of the importance of extensions of number, mathematical structure, the generalization of arithmetic, and structural analysis. Compelling accounts of major breakthroughs in the 19th and 20th centuries follow, emphasizing rational arithmetic after Fermat, contributions from geometry, and topics as diverse as generalized variables, abstractions, differential equations, invariance, uncertainties, and probabilities. Throughout, Professor Bell subordinates details of mere antiquarian interest - involving concepts and ideas that did not succeed or bear fruit - in favor of the fullest possible exposition of those elements still alive in mathematics.