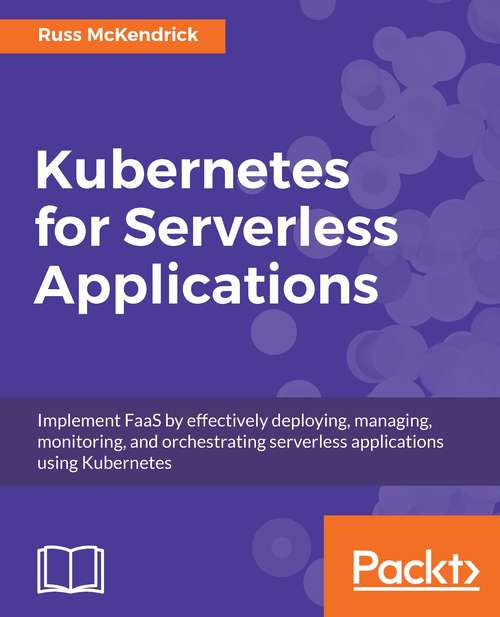 Transform yourself into a Kubernetes specialist in serverless applications. Key Features Get hands-on experience in installing, configuring, and using services such as Kubeless, Funktion, OpenWhisk, and Fission Learn how to launch Kubernetes both locally and in public clouds Explore the differences between using services such as AWS Lambda and Azure Functions and running your own Book Description Kubernetes has established itself as the standard platform for container management, orchestration, and deployment. It has been adopted by companies such as Google, its original developers, and Microsoft as an integral part of their public cloud platforms, so that you can develop for Kubernetes and not worry about being locked into a single vendor. This book will initially start by introducing serverless functions. Then you will configure tools such as Minikube to run Kubernetes. Once you are up-and-running, you will install and configure Kubeless, your first step towards running Function as a Service (FaaS) on Kubernetes. Then you will gradually move towards running Fission, a framework used for managing serverless functions on Kubernetes environments. Towards the end of the book, you will also work with Kubernetes functions on public and private clouds. By the end of this book, we will have mastered using Function as a Service on Kubernetes environments. What you will learn Get a detailed analysis of serverless/Functions as a Service Get hands-on with installing and running tasks in Kubernetes using Minikube Install Kubeless locally and launch your first function Launch Kubernetes in the cloud and move your applications between your local machine and your cloud cluster Deploy applications on Kubernetes using Apache OpenWhisk Explore topics such as Funktion and Fission installation on the cloud followed by launching applications Monitor a serverless function and master security best practices and Kubernetes use cases Who this book is for If you are a DevOps engineer, cloud architect, or a stakeholder keen to learn about serverless functions in Kubernetes environments, then this book is for you.