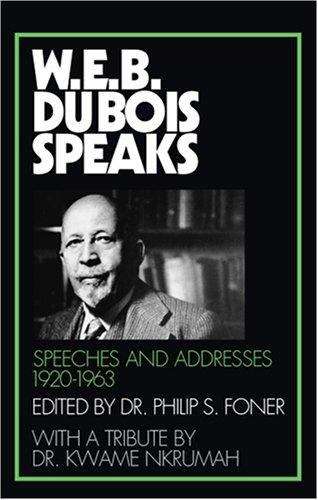 Pioneer for the struggle for Afro-American liberation and for African liberation, prolific Black scholar, W.E.B. Du Bois is one of the giants of the twentieth century. Yet until very recently his contributions have been largely ignored.

Today a growing number of Black and white scholars and students are reading and re-reading many of Du Bois's works and increasingly appreciating his contributions towards advancing the modern civil rights movement and the achievement of African independence.

This volume the second of a two-volume collection is devoted to his speeches from 1920 to his death in 1963. The first volume covers the period of his earliest speeches in the 1890s to the close of the First World War. Nearly all of the speeches in these two volumes have never before been published in book form.

W.E.B. Du Bois Speaks covers the full range of issues involving Black Americans from the era of slavery to the contemporary period. In these speeches, Du Bois set forth clearly and in his usual magnificent prose the various strategies in the Black liberation struggle. But as a profound believer in socialism and internationalism, he also made it clear that this struggle was linked with the interests of all who lived in the United States, regardless of color. An anti-imperialist from his youth, Du Bois repeatedly emphasizes in his speeches the need for all Americans to unite in the struggle against colonialism and for peace.

Each speech is preceded by a brief description of the circumstances under which it was delivered and there are explanatory notes by the editor throughout the volume.