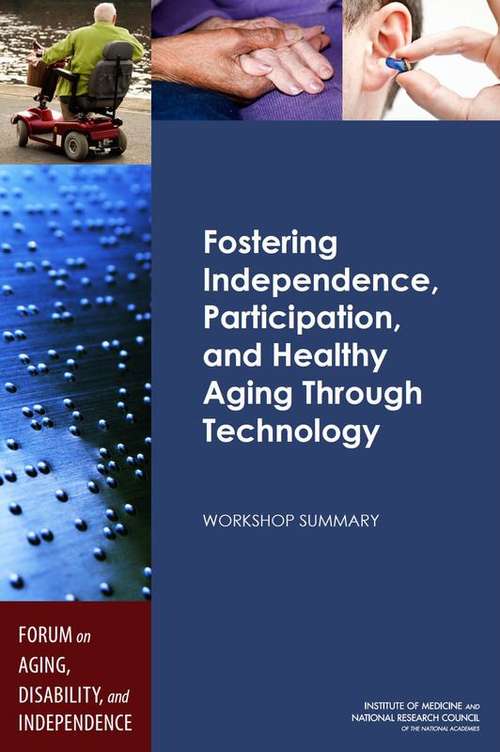 By: Institute of Medicine • National Research Council • Steve Olson • Division of Behavioral and Social Sciences and Education • Board on Health Sciences Policy • Tracy A. Lustig • Forum on Aging, Disability, and Independence
Login
Sign Up

The Institute of Medicine (IOM) and the National Research Council (NRC) have had prominent roles in discussions of aging, disability, and technology for decades. In 1978, Aging and Medical Education (IOM, 1978) raised national awareness of the challenges to physicians posed by the aging of the U.S. population. Thirty years later, Retooling for an Aging America highlighted concerns for the entire health care workforce in view of the aging of the population, including the role of technology in caring for older populations. The 1988 report The Aging Population in the 21st Century examined social, economic, and demographic changes among older adults, as well as many health-related topics: health promotion and disease prevention; quality of life; health care system financing and use; and the quality of care-- especially long-term care. In 1991, the landmark report Disability in America laid out a national agenda to prevent disability and improve the lives of people with disabling conditions. The 1997 report Enabling America: Assessing the Role of Rehabilitation Science and Engineering examined the knowledge base of rehabilitation science and engineering and proposed ways to translate scientific findings into interventions that produce better health. And the 2007 report The Future of Disability in America examined progress made since the earlier reports and looked at continuing barriers that limit the independence, productivity, and participation in community life of people with disabilities. All these reports were produced by committees appointed in accordance with guidelines of the National Academies and met multiples times to compile and review evidence, reach consensus on conclusions and recommendations, draft a report of the committee, and then modify that draft report in response to comments from outside reviewers. The IOM and NRC have also held several workshops related to aging, disability, and technology and published summary reports, such as Technology for Adaptive Aging and Grand Challenges of Our Aging Society. The IOM and NRC also convene groups that take a different approach to issues of pressing national and international importance. Often known as forums or roundtables, these groups meet regularly to foster dialogue and confront issues of mutual interest and concern among a broad range of stakeholders. They can convene workshops, initiate cooperative projects among members, commission independently authored articles, and generate ideas for independent consensus studies. In 2012 the IOM and NRC joined together to establish the Forum on Aging, Disability, and Independence to provide a neutral venue for broad-ranging discussions among the many stakeholders involved with aging and disability. The goals of the forum are to highlight areas in which the coordination of the aging and disability networks is strong, examine the challenges involved in aligning the aging and disability networks, explore new approaches for resolving problem areas, elevate the visibility and broaden the perspectives of stakeholders, and set the stage for future policy actions. Forum sponsors and members include federal agencies, health professional associations, private sector businesses, academics, and consumers. Fostering Independence, Participation, and Healthy Aging Through Technology summarizes this workshop.

Copyright:
2013 the National Academy of Sciences