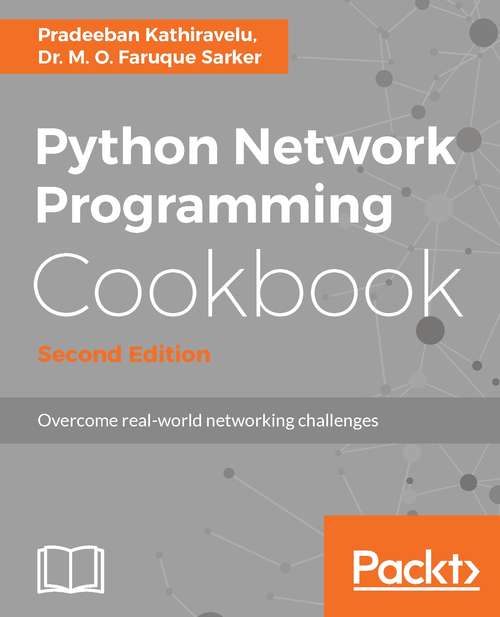 • Familiarize yourself with the fundamentals and functionalities of SDN

This book is for network engineers, system/network administrators, network programmers, and even web application developers who want to solve everyday network-related problems. If you are a novice, you will develop an understanding of the concepts as you progress with this book.

• Interact with popular websites via web services such as XML-RPC, SOAP, and REST APIs

In this edition, you will also be introduced to network modelling to build your own cloud network. You will learn about the concepts and fundamentals of SDN and then extend your network with Mininet. Next, you'll find recipes on Authentication, Authorization, and Accounting (AAA) and open and proprietary SDN approaches and frameworks. You will also learn to configure the Linux Foundation networking ecosystem and deploy and automate your networks with Python in the cloud and the Internet scale.

By the end of this book, you will be able to analyze your network security vulnerabilities using advanced network packet capture and analysis techniques.

This book follows a practical approach and covers major aspects of network programming in Python. It provides hands-on recipes combined with short and concise explanations on code snippets. This book will serve as a supplementary material to develop hands-on skills in any academic course on network programming. This book further elaborates network softwarization, including Software-Defined Networking (SDN), Network Functions Virtualization (NFV), and orchestration. We learn to configure and deploy enterprise network platforms, develop applications on top of them with Python.