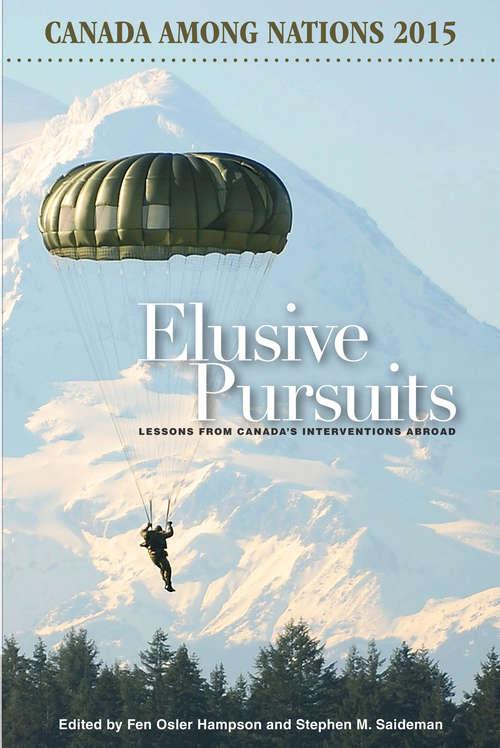 Canada has been almost continuously involved in major international peace and security enforcement operations since the early 1990s, as part of multilateral efforts to stop wars, monitor peace, avert genocide, promote development or, occasionally, to topple dictators and even win wars. It has deployed anywhere from 1,000 to 4,000 personnel overseas annually since the Gulf War, and participated in missions in Afghanistan, Somalia, Bosnia, Haiti, Libya, East Timor, Iraq and Syria. This volume looks at Canada's role as interventionist within three broad themes: the lessons learned from interventions in Libya, Afghanistan, Somalia and Haiti; the domestic side of intervention, including Canadian foreign aid and the gender equation in military interventions; and the responsibility to protect, addressing the larger principles and patterns that influence Canada's engagements.

Elusive Pursuits: Lessons from Canada's Interventions Abroad -- the 29th volume of the influential Canada Among Nations series -- examines Canada's role in foreign military and security missions, including the country's tendency to intervene under the auspices of international institutions. Canada is not just among nations in these efforts, but in nations on a regular basis. This book considers the longer-term impact of these interventions and draws the lessons to be learned from Canada's past and current interventions, with the certainty that there will always be a next time.

Canada Among Nations has been the premier source for critical insight into Canadian foreign policy issues since 1984. This edition continues that tradition by providing students, policy makers and practitioners with a timely compendium of expert opinion on how Canada's past and present military and peacekeeping missions can provide guidance for engagement in the future.