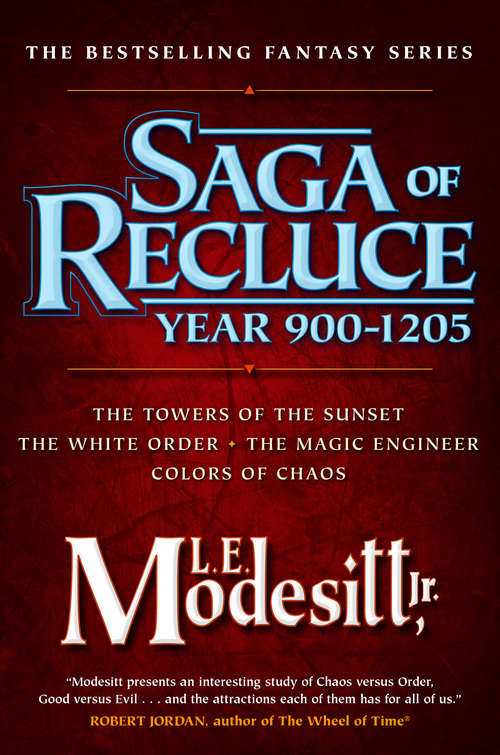 This discounted ebundle includes: Towers of Sunset, The White Order, The Magic Engineer, Colors of ChaosA world of warring magical forces: black order, white chaos, and shades of gray."An intriguing fantasy in a fascinating world." —Robert Jordan, New York Times bestselling author of The Wheel of Time® seriesL.E. Modesitt, Jr.'s bestselling fantasy novels set in the magical world of Recluce are among the most popular in contemporary fantasy. Each novel tells an independent story that nevertheless reverberates though all the other books in the series, to deepen and enhance the reading experience. Rich in detail, the Saga of Recluce is a feast of wondrous marvels.Year 900The Towers of Sunset — Creslin, son of the Marshall of Westwind, flees an arranged marriage; is enslaved by the White Wizards, escapes, and enters a marriage of convenience to Maegara, the white witch; they escape to create the nation of Recluce. Year 1190 The White Order — Cerryl, orphan son of a renegade white mage, works his way toward the heritage which fate – and the Guild of the White Order – have denied him. He becomes an apprentice scrivener in Fairhaven, only to discover the white wizards are observing his every move... and may take his life.Year 1200The Magic Engineer — Dorrin is exiled from Recluce because of his love of forbidden machines; he, Kadara, and Brede travel through Candar and settle in Spidlar; the White Wizards of Fairhaven raise mountains and build roads build roads through them to unite Candar under chaos-rule; the three must face the onslaught of chaos.Year 1205 Colors of Chaos — Cerryl has just discovered the problems facing Fairhaven when he must cope with dangers from all across Candar, from Recluce, and within Fairhaven itself, including the jealousy of the High Wizard himself.Saga of Recluce#1 The Magic of Recluce#2 The Towers of Sunset#3 The Magic Engineer#4 The Order War#5 The Death of Chaos#6 Fall of Angels#7 The Chaos Balance#8 The White Order#9 Colors of Chaos#10 Magi’i of Cyador#11 Scion of Cyador#12 Wellspring of Chaos#13 Ordermaster#14 Natural Order Mage#15 Mage-Guard of Hamor#16 Arms-Commander#17 Cyador’s Heirs#18 Heritage of Cyador#19 The Mongrel Mage (forthcoming)Story Collection: Recluce TalesOther Series by L.E. Modesitt, Jr.The Imager PortfolioThe Corean ChroniclesThe Spellsong CycleThe Ghost BooksThe Ecolitan MatterAt the Publisher's request, this title is being sold without Digital Rights Management Software (DRM) applied.