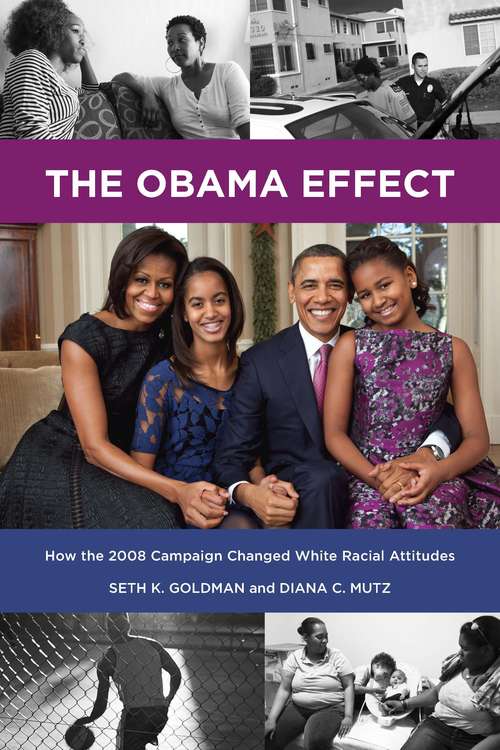 Barack Obama’s historic 2008 campaign exposed many white Americans more than ever before to a black individual who defied negative stereotypes. While Obama’s politics divided voters, Americans uniformly perceived Obama as highly successful, intelligent, and charismatic. What effect, if any, did the innumerable images of Obama and his family have on racial attitudes among whites? In The Obama Effect, Seth K. Goldman and Diana C. Mutz uncover persuasive evidence that white racial prejudice toward blacks significantly declined during the Obama campaign. Their innovative research rigorously examines how racial attitudes form, and whether they can be changed for the better.

The Obama Effect draws from a survey of 20,000 people, whom the authors interviewed up to five times over the course of a year. This panel survey sets the volume apart from most research on racial attitudes. From the summer of 2008 through Obama’s inauguration in 2009, there was a gradual but clear trend toward lower levels of white prejudice against blacks. Goldman and Mutz argue that these changes occurred largely without people’s conscious awareness. Instead, as Obama became increasingly prominent in the media, he emerged as an “exemplar” that countered negative stereotypes in the minds of white Americans. Unfortunately, this change in attitudes did not last. By 2010, racial prejudice among whites had largely returned to pre-2008 levels. Mutz and Goldman argue that news coverage of Obama declined substantially after his election, allowing other, more negative images of African Americans to re-emerge in the media. The Obama Effect arrives at two key conclusions: Racial attitudes can change even within relatively short periods of time, and how African Americans are portrayed in the mass media affects how they change.

While Obama’s election did not usher in a “post-racial America,” The Obama Effect provides hopeful evidence that racial attitudes can—and, for a time, did—improve during Obama’s campaign. Engaging and thorough, this volume offers a new understanding of the relationship between the mass media and racial attitudes in America.