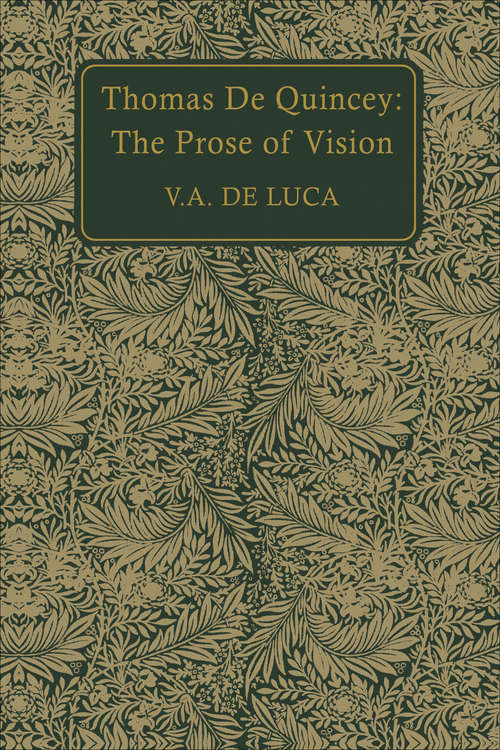 Thomas De Quincey: The Prose of Vision is the first full-length critical study of De Quincey's imaginative writings. Considering these writings as a 'prose of vision' transcending their origins in magazine journalism, the author stresses their relationship to the Romantic traditions of imaginative vision and inward quest. He traces continuing themes and their transformations throughout De Quincey's career, and he offers sustained critical readings of De Quincey's major works.

Professor De Luca discusses, in chronological sequence, the original version of Confessions of an English Opium-Eater, in which De Quincey traces his passage from innocence to experience; Gothic tales and essays on murder, which reveal a fascination with the concept of power; and the major works of De Quincey's later years, including Suspiria de Profundis, The English Mail-Coach, and the revised Confessions, which show the richest development of his interest in vision and in self-exploration. The book concludes with a discussion of the equivocal implications in De Quincey's three late major works and relates these implications to the equivocal tendencies in the Romantic tradition itself – its uneasy yearning for transcendence and its courageous commitment to the flow of ordinary experience.

This study, which makes a significant contribution to an understanding of De Quincey's works, will be of particular interest to students of Romanticism.