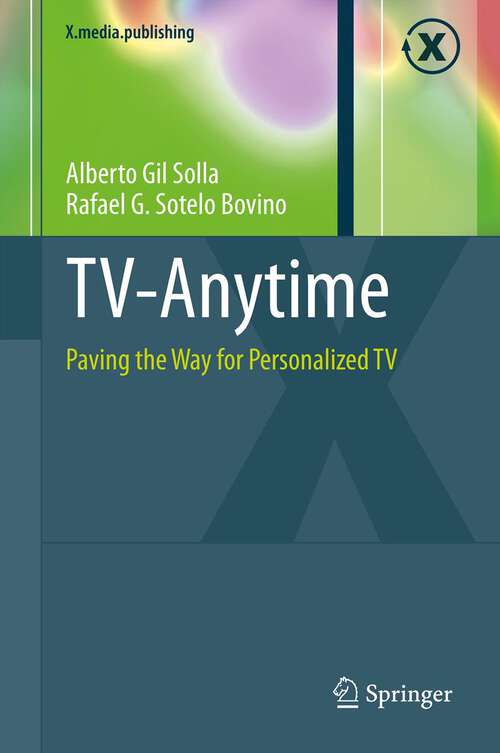 Television is a mature mass media with close to eight decades of regular broadcasts since its beginnings in Germany, the UK and the USA. Today, despite the spectacular growth of the Internet and social networks, television is still the leading medium for entertainment and information across the world, exerting an unparalleled influence on public opinion. Until recently television had undergone a rather slow evolution regarding the interaction with its users, yet this is beginning to change. The ongoing trend of digitalization has accelerated the process, and the computational capacity of televisions and set-top boxes has increased the possibilities of communication and implementation of services.

This book provides the first descriptive and structured presentation of the TV-Anytime norm, which will standardize information formats and communication protocols to create a framework for the development of novel and intelligent services in the audiovisual market. The standard, the dissemination of which has been entrusted to the European Telecommunications Standards Institute, ensures manufacturers and service providers that their products will be presented to the widest possible market, without fear of being constrained by the wars of interest typical for emerging technologies. The individual chapters provide detailed descriptions of the new standard's most important capabilities and contributions, including metadata management, customization and personalization processes, uni- and bidirectional data transfer, and remote receiver programming.

Overall, the authors deliver a solid introduction to the standard. To ensure a better understanding of concepts and tools, they present a wide range of simple examples illustrating many different usage scenarios that can be found when describing users, equipment and content. This presentation style mainly targets professionals in the television and broadcasting industry who are interested in acquainting themselves with the standard and the possibilities it offers.