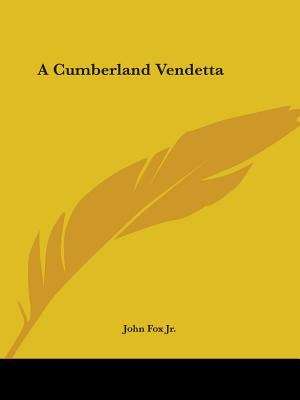 The Stetsons and the Lewallens had come to the Cumberland as friends but lived as enemies for almost fifty years. After the Civil War they were still neighbors and still irascible foes.

The war had supplied them both with defenses which demonstrated an hereditary loathing for human life and an appetite for unrestraint. Even though peace had been tolerated for many years, one day, in an ambush, Old Jasper Lewallen killed Rome Stetson's father. Rome's Uncle Rufe escaped to the West, and the Stetsons had no leader. There was no news of Rufe for three years until suddenly he returned to town and opened a shop in the county-seat of Hazlan, on the opposite end of the street where Old Jasper had a store. The tension in Hazlan ran high, and Rufe was warned not to appear outside his door after dark. Young Jasper attended to this edict. However, his sister, Martha would take some corn to be ground at the mill on Stetson's side of the river, a mill operated by Old Gabe Bunch. Rome saw her there as he visited the mill one night, and memories of meeting her years ago flooded back. Rome learned of her history from Old Gabe, and he also formed his own impressions after noting her strong arms, the native dignity in the pose of her head, her deep eyes, her graceful movements. The motive for his opposition to the Lewallens had disappeared. He decided that her plucky spirit prompted his own craving for defiance. The high-strung situation continued until Rome met Young Jasper on a mountain ledge where Rome offered an end to the unyielding conflict. Finally, with the deaths of Old Jasper and Rufe, blame was questionable and any justice uncertain. Rome, after a spring season spent hiding from the soldiers sent to capture him for the recent deaths, was at last able to meet Martha and tell her the true occurrence on the mountain ledge. He asked her to run away with him to another jurisdiction where he was not a wanted man. Their mutual decision made the end to the generations-long feud complete and irrefutable.