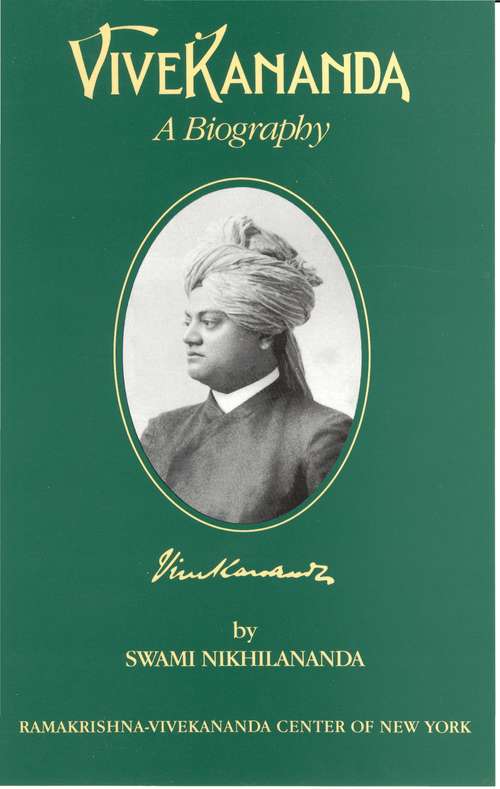 An absorbing biography of Swami Vivekananda (1863 - 1902). With 28 photographs and Appendix containing most important teachings.

Swami Vivekananda, India's first spiritual and cultural ambassador to the West, came to represent the religions of India at the World's Parliament of Religions, held at Chicago in connection with the World's Fair (Columbian Exposition) of 1893. His message of the unity of humankind and harmony of religions was embraced by the public and press of the time as representing the essence of the Parliament. The Swami wished to create a bridge between the East and the West by bringing to America the gift of India's ancient spirituality, in exchange for the scientific and industrial outlook of the West. After four years of traveling and teaching in America and Europe, the Swami returned to India, where he is revered as a "Patriot Saint." The government of India has declared his birthday a national holiday. In 1976 on the occasion of the American Bicentennial, Swami Vivekananda was honored by the Smithsonian Institution's National Portrait Gallery as one who came to America from abroad during the past 200 years and made a significant impact on its spiritual development.

Upon his return to India, Swami Vivekananda founded The Ramakrishna Order of India in the name of his teacher, Sri Ramakrishna, who is regarded as the Prophet of Harmony of Religions. The Order is the pre-eminent religious organization of modern India. More than 1000 monks of the Order serve throughout the world. While in the West the work is mainly in the form of conducting worship, teaching, writing and lecturing, in India the Order is widely known for its vast charitable activities -- running hospitals and schools, rural uplift, and extensive relief work in times of emergency. The Swamis of the Order work tirelessly in the spirit of "Service of God in Man," regarding the service of all people as a veritable form of worship.