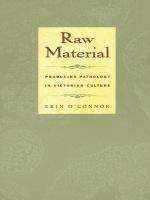 Raw Material analyzes how Victorians used the pathology of disease to express deep-seated anxieties about a rapidly industrializing England's relationship to the material world. Drawing on medicine, literature, political economy, sociology, anthropology, and popular advertising, Erin O'Connor explores "the industrial logic of disease," the dynamic that coupled pathology and production in Victorian thinking about cultural processes in general, and about disease in particular. O'Connor focuses on how four particularly troubling physical conditions were represented in a variety of literature. She begins by exploring how Asiatic cholera, which reached epidemic proportions on four separate occasions between 1832 and 1865, was thought to represent the dangers of cultural contamination and dissolution. The next two chapters concentrate on the problems breast cancer and amputation posed for understanding gender. After discussing how breast cancer was believed to be caused by the female body's intolerance to urban life, O'Connor turns to men's bodies, examining how new prosthetic technology allowed dismembered soldiers and industrial workers to reconstruct themselves as productive members of society. The final chapter explores how freak shows displayed gross deformity as the stuff of a new and improved individuality. Complicating an understanding of the Victorian body as both a stable and stabilizing structure, she elaborates how Victorians used disease as a messy, often strategically unintelligible way of articulating the uncertainties of chaotic change. Over the course of the century, O'Connor shows, the disfiguring process of disease became a way of symbolically transfiguring the self. While cholera, cancer, limb loss, and deformity incapacitated and even killed people, their dramatic symptoms provided opportunities for imaginatively adapting to a world where it was increasingly difficult to determine not only what it meant to be human but also what it meant to be alive. Raw Material will interest an audience of students and scholars of Victorian literature, cultural history, and the history of medicine.