What Would Jefferson Do? 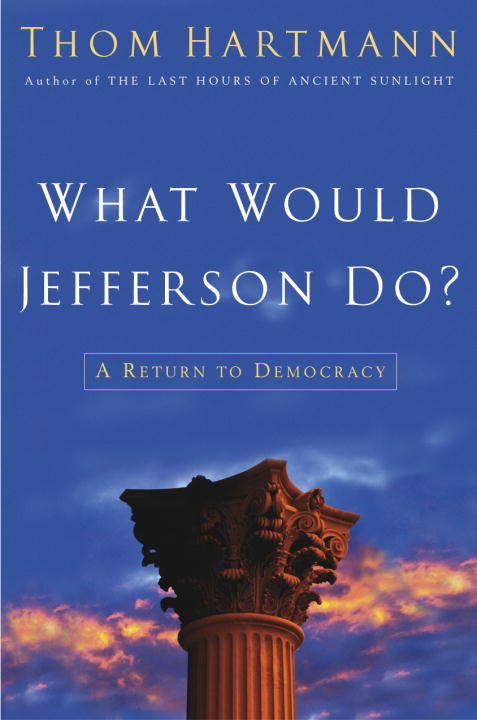 When the Founding Fathers were searching for the best and fairest form of government, they studied the models of Athenian democracy, the Roman republic, and the Iroquois Confederacy and created what is now called a modern liberal democracy. Today, 81 nations can be described as fully democratic. Yet in numerous countries around the world democracy has failed or is tottering, and in the United States its principles are increasingly under siege from corporate and other forces. Americans pride themselves on their democracy, but today's legislative process often no longer reflects the vision of the Founders.In What Would Jefferson Do?, Thom Hartmann shows why democracy is not an aberration in human history but the oldest, most resilient, and most universal form of government, with roots in nature itself. He traces in particular the history of democracy in the United States, identifies the most prevalent myths about it, and offers an inspiring yet realistic plan for transforming the political landscape and reviving Jefferson's dream before it is too late."Hartmann has done it again. Passionately written and filled with original historical research, What Would Jefferson Do? offers important insights into the meaning and nature of democracy and what we must do to counter the warlords, theocrats, and corporate aristocrats who now place it at risk."--David C. Korten, author of When Corporations Rule the World and The Post-Corporate World"A riveting and absolutely essential book for anyone who wishes to reflect upon and awaken to the real meaning of America and the hope it still offers to the world."--Jacob Needleman, author of The American Soul:Rediscovering the Wisdom of the Founders"A call to vigilance and action--to awaken the better angels of our democratic spirit and wrest our planet away from the corporate overlords. Infused with an optimistic spirit, What Would Jefferson Do? is a true 'patriot act' in the tradition of Thomas Paine."--Chuck Collins, United for Fair Economy, and coauthor of Wealth and Our Commonwealth"Thom Hartmann looks at the big picture and asks the hard questions. He's an important voice for reclaiming our democracy."--Paul Loeb, author of Soul of a Citizen"Thom Hartmann calls on us to take control of the helm and guide our nation back to its base of 'We the people.' Read this book for its historic grounding; heed his SOS for our future well-being."--Medea Benjamin, cofounder of Global Exchange and Codepink:Women for Peace"Thom Hartmann offers us an eye-opening view of how democracy is threatened. America needs this book now more than ever before."--Greg Palast, author of The Best Democracy Money Can BuyFrom the Hardcover edition.