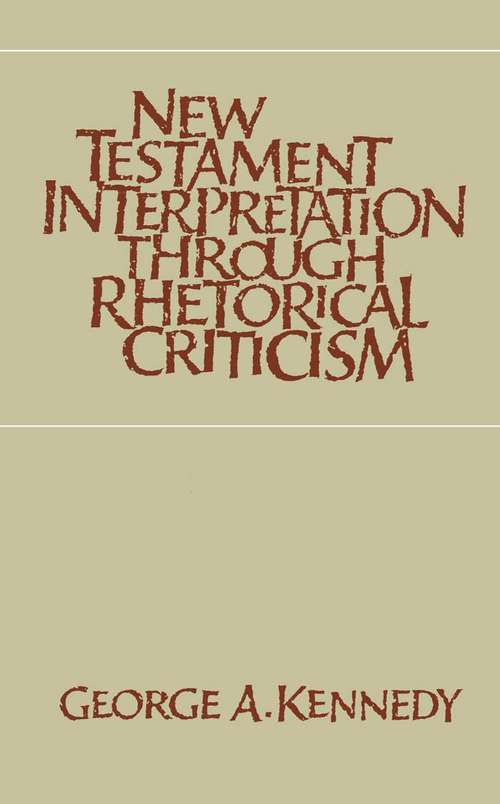 New Testament Interpretation through Rhetorical Criticism provides readers of the Bible with an important tool for understanding the Scriptures. Based on the theory and practice of Greek rhetoric in the New Testament, George Kennedy's approach acknowledges that New Testament writers wrote to persuade an audience of the truth of their messages. These writers employed rhetorical conventions that were widely known and imitated in the society of the times. Sometimes confirming but often challenging common interpretations of texts, this is the first systematic study of the rhetorical composition of the New Testament.As a complement to form criticism, historical criticism, and other methods of biblical analysis, rhetorical criticism focuses on the text as we have it and seeks to discover the basis of its powerful appeal and the intent of its authors. Kennedy shows that biblical writers employed both "external" modes of persuasion, such as scriptural authority, the evidence of miracles, and the testimony of witnesses, and "internal" methods, such as ethos (authority and character of the speaker), pathos (emotional appeal to the audience), and logos (deductive and inductive argument in the text).In the opening chapter Kennedy presents a survey of how rhetoric was taught in the New Testament period and outlines a rigorous method of rhetorical criticism that involves a series of steps. He provides in succeeding chapters examples of rhetorical analysis, looking closely at the Sermon on the Mount, the Sermon on the Plain, Jesus' farewell to the disciples in John's Gospel, the distinctive rhetoric of Jesus, the speeches in Acts, and the approach of Saint Paul in Second Corinthians, Thessalonians, Galatians, and Romans.