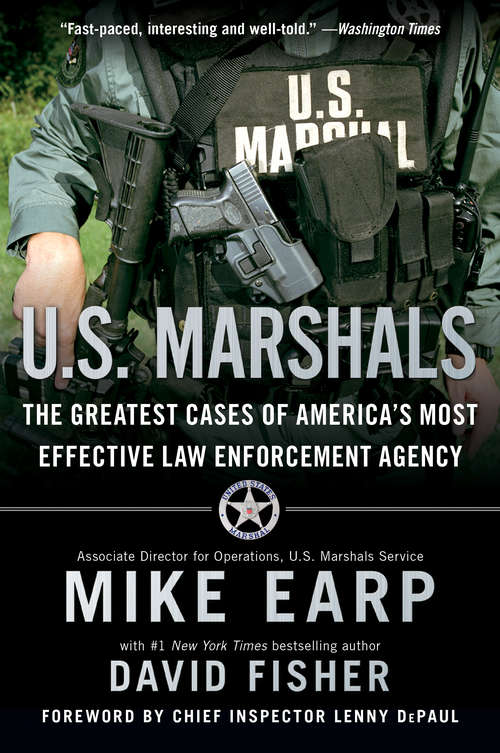 Deputy U.S. Marshal: How often did you draw your gun?Retiring FBI Agent: Never. You?Deputy U.S. Marshal: Seven times before lunch.123,006 FugitivesThat's how many wanted men and women, each with an average of four felony convictions to his or her name, the U.S. Marshals Service tracked down and arrested in 2012. Of that number, 3,962 were charged with murder, most were violent career criminals, and all were on the run from the authorities. If you are a fugitive in America, your worst nightmare is a deputy U.S. marshal on your trail: each year the Marshals Service takes more criminals off the streets than every other federal law enforcement agency--combined.From Mike Earp, the former associate director of operations for the Marshals Service, and New York Times bestselling author David Fisher, this book tells the thrilling inside story of today's U.S. marshals in their own words. Based on interviews with more than fifty current and former deputies, as well as Earp's personal case notes, here are the greatest cases, hairiest arrests, and most unforgettable moments, all revealed for the first time. Here also is a history of how the marshals of legend have evolved into the country's frontline law enforcement agency, charged with apprehending the most notorious and dangerous suspects. The U.S. Marshals Service is America's oldest law enforcement agency, established in 1789 by George Washington, who called for "the selection of the fittest characters to expound the law and dispense justice." It has had a long and colorful history, famously interwoven into the mythology of the Wild West, with notable real-life marshals like Wyatt Earp and Bass Reeves and legendary fictional characters like Matt Dillon, Elmore Leonard's Raylan Givens, and Rooster Cogburn, played by John Wayne in the 1969 film True Grit.However, what few people realize is that in the past three decades the marshals have been at the heart of a transformation of the entire structure of law enforcement in America. The Marshals Service has become the most effective U.S. law enforcement agency, responsible for tracking down the nation's most wanted fugitives. Organized under the Department of Justice, the marshals serve as the apprehension arm for most federal agencies, including the FBI and the DEA, and across the nation U.S. Marshals regional task forces aid state and local law enforcement authorities to catch the most dangerous fugitives. All told, the Marshals Service processes more than 150,000 warrants each year, and deputies make an average of 337 arrests per day. They are also charged with transporting federal prisoners, protecting judges, and operating the Witness Security Program.This is the untold story of the new U.S. Marshals Service, as seen through the eyes of the men and women who were pivotal in solving many of the most high-profile and dangerous cases in recent history.