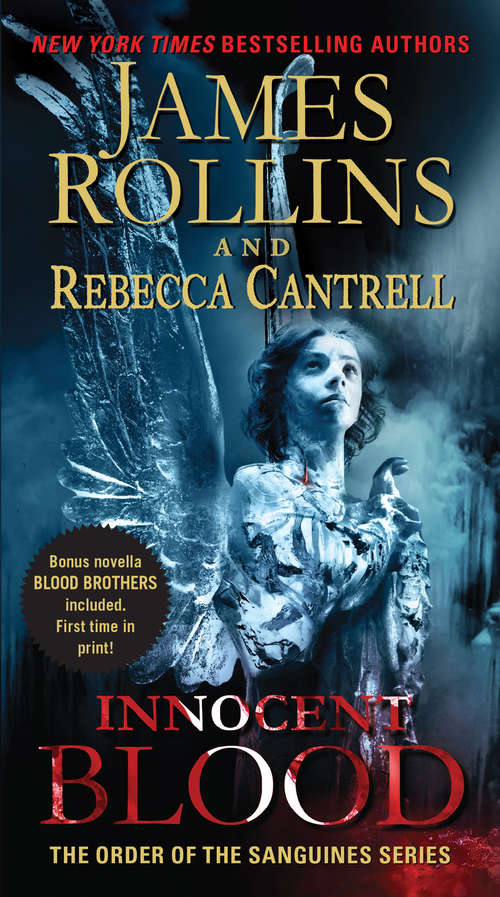 In a masterwork of international adventure, supernatural mystery, and apocalyptic prophecy, New York Times bestselling authors James Rollins and Rebecca Cantrell open the next chapter in a world of shadow and light, of salvation and damnation, where the fate of the heavens is locked within a child of . . . Innocent BloodA vicious attack at a ranch in California thrusts archaeologist Erin Granger back into the fold of the Sanguines, an immortal order founded on the blood of Christ and tasked with protecting the world from the beasts haunting its shadows and waiting to break free into the sunlight. Following the prophetic words found in the Blood Gospel--a tome written by Christ and lost for centuries--Erin must again join forces with Army Sergeant Jordan Stone and the dark mystery that is Father Rhun Korza to discover and protect a boy believed to be an angel given flesh.But an enigmatic enemy of immense power and terrifying ambition seeks the same child--not to save the world, but to hasten its destruction. For any chance of victory, Erin must discover the truth behind Christ's early years and understand His first true miracle, an event wrapped in sin and destruction, an act that yet remains unfulfilled and holds the only hope for the world.The search for the truth will take Erin and the others across centuries and around the world, from the dusty plains of the Holy Land to the icy waters of the Arctic Ocean, from the catacombs of Rome to an iron fortress in the Mediterranean Sea, and at last to the very gates of Hell itself, where their destiny--and the fate of humankind--awaits.With The Blood Gospel, the first novel in the Order of the Sanguines series, James Rollins and Rebecca Cantrell breathtakingly combined science, myth, and religion and introduced a world where miracles hold new meaning and the fight for good over evil is far more complicated than we ever dreamed. In Innocent Blood they again take us to the edge of destruction . . . and into the deepest reaches of the imagination.