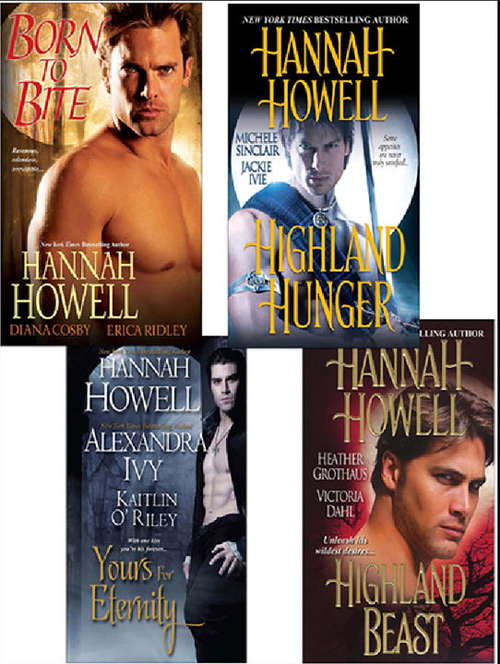 New York Times bestselling author Hannah Howell, Victoria Dahl, and Heather Grothaus offer three unforgettable stories set in the Scottish highlands, where forbidden longings take over. . . "The Beast Within" by Hannah Howell Gybbon MacNachton spends his days searching for the Lost Ones--demons with the powerful MacNachton bloodline who are being hunted by those who want to destroy them. When he stumbles upon Alice Boyd, living like a wild animal in the forest, she stirs a primitive lust deep within him--a lust that can only be sated by their explosive union. . . "Laird of Midnight" by Victoria Dahl For fifty years, Finlay Maclain has hunted the clan of vampires who murdered his family and turned him into one of them. Now, he's at the end of his quest, sitting at a tavern, waiting for the last vampire he must kill. But the tavern's beautiful wench is distracting him beyond reason--and all he can think of is teasing her until she begs him to take her again and again. . . In this sizzling new collection, three women fall under the spell of three irresistible vampires who promise to satisfy their every desire. . .Hidden in the shadowy caves and caverns of the Scottish Highlands, secret vampire clans wage dark battles both deadly and passionate. . ."Dark Embrace" by Hannah HowellWhile searching for his clan's demon Lost Ones, Raibeart MacNachton encounters an ethereal beauty running for her life. The decision to play hero is easy; fighting the urge to ravish the enchanting Una Dunn is more difficult--especially when Raibeart learns they share a powerful connection. "The Guardian" by Michele SinclairThe immortal Dorian vows never to fall in love with a mere human--until he meets the beguiling, arousing, Moirae Deincourt. She stirs a longing in Dorian that he dares not quench. But when Moirae's life is put in danger, her true nature is revealed--and the lust that rages between them can no longer be controlled. . . "A Knight Beyond Black" by Jackie IvieVampire Iain Duncan MacAvee has stepped forward to claim the woman he betrothed years ago--only to learn that the tempting Lady Tira knows nothing of the engagement. Though Tira feigns disinterest, the Duke's animal-like charisma has unleashed her most carnal desires--a hunger only Iain can satisfy. . .Darkly handsome and dangerously sexy, these voracious vampires are out for blood--and bound for eternal love. . .Dark Secret by Hannah Howell Alone in the world, Murdina Dunbar sets out in search of the only family she has left--and finds an ally in the mysterious Sir Gillanders Baldwin. Something about her sexy protector stirs her blood. Soon, not even the whispers that he's a dangerous demon can keep her from his bed. . ..Never Been Bitten by Erica RidleyRumored to be a vampire, the rakish Mr. Macane is ravishing all the ladies of the ton! Yet, Miss Elspeth Ramsay cannot bring herself to tremble in his presence. But once Ellie feels the touch of his teeth at her throat, she finds herself biting him back! Surely this sudden bloodlust can only mean danger for her family--and her heart. . ..Highland Vampire by Diana Cosby As King of the Highland Coven, vampire Aedan MacGregor knows that falling for the fey Rowan Campbell could destroy her. But one taste of her healing blood and he craves her like no other. Dare claim her as his own, knowing he might lose her forever?