As Long As We Both Shall Love 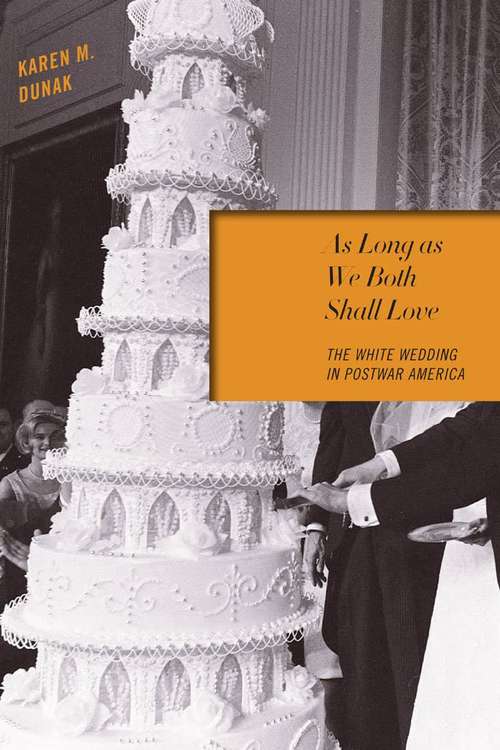 When Kate Middleton married Prince William in 2011, hundreds of millions of viewers watched the Alexander McQueen-clad bride and uniformed groom exchange vows before the Archbishop of Canterbury in Westminster Abbey. The wedding followed a familiar formula: ritual, vows, reception, and a white gown for the bride. Commonly known as a white wedding, the formula is firmly ensconced in popular culture, with movies like Father of the Bride or Bride Wars, shows like Say Yes to the Dress and Bridezillas, and live broadcast royal or reality-TV weddings garnering millions of viewers each year. Despite being condemned by some critics as "cookie-cutter" or conformist, the wedding has in fact progressively allowed for social, cultural, and political challenges to understandings of sex, gender, marriage, and citizenship, thereby providing an ideal site for historical inquiry. As Long as We Both Shall Love establishes that the evolution of the American white wedding emerges from our nation's proclivity towards privacy and the individual, as well as the increasingly egalitarian relationships between men and women in the decades following World War II. Blending cultural analysis of film, fiction, advertising, and prescriptive literature with personal views expressed in letters, diaries, essays, and oral histories, author Karen M. Dunak engages ways in which the modern wedding emblemizes a diverse and consumerist culture and aims to reveal an ongoing debate about the power of peer culture, media, and the marketplace in America. Rather than celebrating wedding traditions as they "used to be" and critiquing contemporary celebrations for their lavish leanings, this text provides a nuanced history of the American wedding and its celebrants. Karen M. Dunak is Assistant Professor of History at Muskingum University in New Concord, Ohio.